Okra is a classic Southern vegetable found in many one-pot dishes such as gumbo. The slimy liquid inside the okra acts as a thickening agent for a gumbo or stew base. Aside from this common use, okra is also served breaded and fried or baked. If you want the crunchy texture of fried okra without the added fat and grease of oil cooking, bake your breaded okra in a traditional oven or convert the cooking time slightly and get the same result from your convection oven. 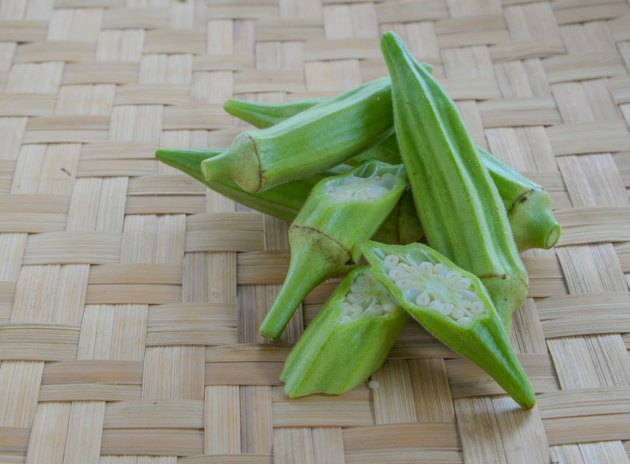 Convection ovens circulate the hot air inside the oven to provide an even-heating cooking environment. The steady circulation of hot air cooks food in less time and more evenly than a traditional radiant heat oven. When you convert a recipe from a traditional cooking time to a convection oven, begin checking your food 4 to 5 minutes before the end of the cooking time to see if it is done. If you struggle with adjusting time, reduce the cooking temperature by 25 degrees Fahrenheit.

Roll okra in cornmeal mixed with the seasonings of your choice. A teaspoon of salt per cup of cornmeal helps to enhance the flavor of the okra after cooking. Apply a thin drizzle of olive oil to the baking sheet before you lay the okra in a single layer. Place the baking sheet in a 400 F oven for 30 minutes, turning the okra after 15 minutes to crisp both sides evenly. Breadcrumbs are an alternative coating, but cornmeal holds up to the natural moisture in the okra and crisps well even in the oven.

Frozen breaded okra is commonly deep fried or pan-fried until it is golden brown and crispy. Sprinkle olive oil on a baking sheet, then spread frozen okra in an even layer. Bake it at 400 F for 20 minutes. Remove the sheet from the oven and turn the okra, returning them to the heat for another 20 minutes or until they are golden brown. Sprinkle them with a small amount of salt, if desired, to bring out the limited flavors in the okra.

Soak okra in lemon juice or vinegar for 20 minutes before breading and cooking it to reduce the sticky, slimy texture. If you blanch it before breading, the okra will cook quicker and produce a more tender result. Submerge the okra in boiling water for 2 to 3 minutes, then shock them in a bowl of ice water to stop the cooking process. Proceed with breading and place them in the oven. Check them with 5 minutes left on the cooking time.

A single serving of breaded okra contains approximately 16 pieces, the equivalent of 3/4 cup. There are 120 calories per serving and less than 1 gram of fat. Cholesterol-free, each serving provides 26 grams of carbohydrates and 3 grams of protein. The sodium content varies based on the recipe, but some commercial brands of frozen breaded okra contain as much as 620 milligrams of sodium. Check the labels carefully to confirm the nutritional content.